My sabbatical journey has taken me to Paris France.  On this leg of my adventure I am not visiting schools or meeting with faculty rather just passing through on my way to The Netherlands. In the Netherlands   I will meet with staff of the van Leer Foundation which  has supported early childhood projects around the world . The van Leer Foundation was a part of my experience in the Peace Corps in Jamaica as they partnered with the Jamaican government to launch training for Basic School Teachers.

In this blog you will see some of the sites and views I am experiencing. There are so many grand buildings in Paris and the architecture is  different from the other places I have visited. Paris is indeed a beautiful, friendly city.

Carol, my childhood friend from Hibbing  joined me on this leg of my adventure.  We have literally been have been here, there and everywhere in Paris in the past four days!  From the Louvre to cruising on Seine to visiting the Picasso Museum…and more. ,  Thanks to my friend Kathy M. who is related to the manager,  we are staying at the ATN hotel.  It has been a delightful place to stay and well located for exploring Paris.

Here are some of the sites we visited. , Notre-Dame. It was built on the site of a Roman temple and was commissioned to have a cathedral built in 1159 by Bishop de Sully. The first stone was laid in 1163 and that began two centuries of work by thousands of Gothic architects and craftsman. The cathedral has been the site of great events in French history such as the coronations of Henry VI in 1422 and Napoleon Bonaparte in 1804.  When we arrived to enter there was no line. I was told that was remarkable. We simply walked right in. Upon coming out, the line had formed and what line it was!  A priest invited us to attend the 100 Remembrance Service of peace between France and Germany this Sunday.  He added not to be surprised to see a large security force presence.  That addition to his invitation is a reminder of the times we live in

We returned on Sunday for the Remembrance Service and the lines were very, very, very long. Instead I opted to stand near the entrance for the dignitaries .

Not to be missed when visiting  Paris is the Louvre. It is a massive museum holding some of the most important collections in the world. It’s history goes back to medieval times when it was built as a fortress n 1190 to protect against Viking raids.   It was also royal residence and became a museum in 1793 during the French revolutions. The collections are on 5 levels and have three inter-connecting wings.   No way we could see it all in one day!  A famous painting that you will be familiar with is the Mona Lisa.  On the day we visited the Louvre, Carol noted we clocked over 7 miles of walking..and I think at least half of it had to be be inside the Louvre itself.  Here you will see the side of the Louvre and some of the beautiful items. Napoleon had his residence here and you can view his apartments. 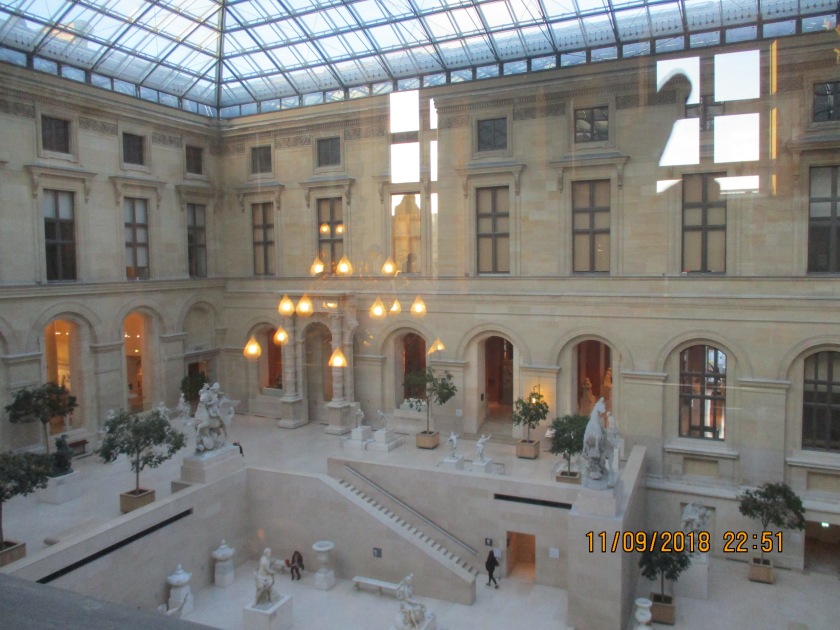 Here are a few more images from the Louvre. 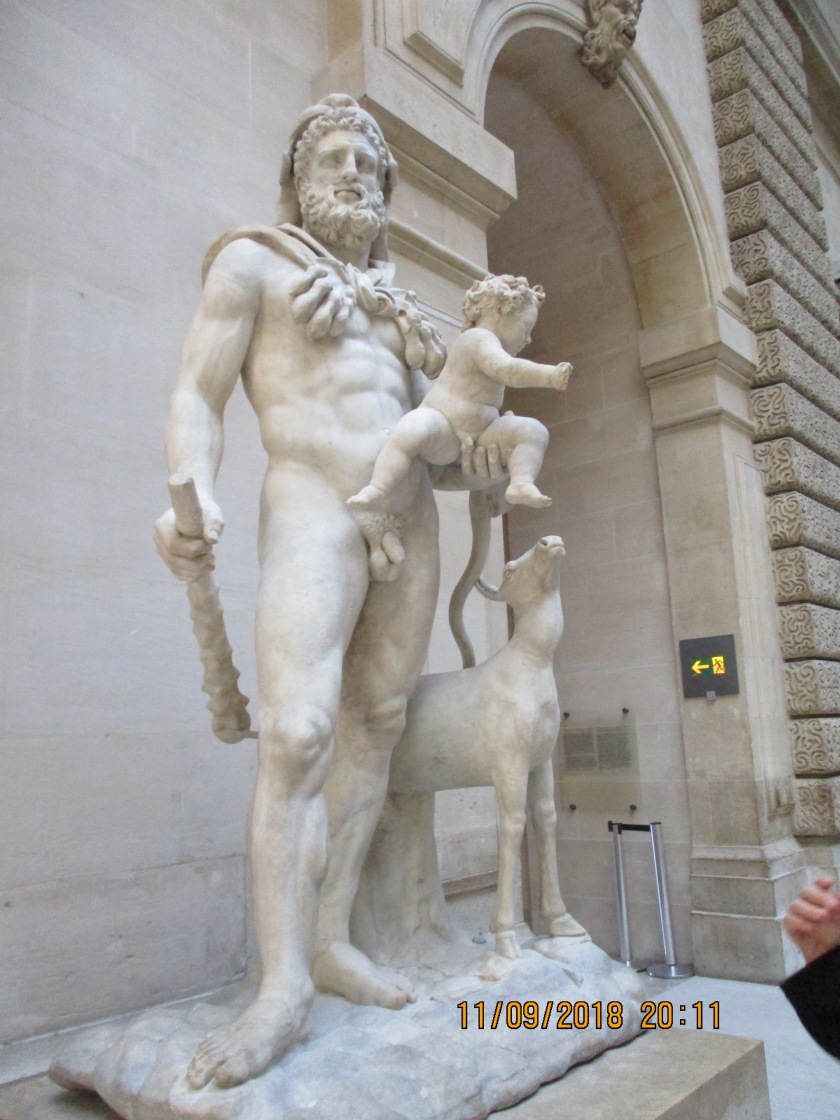 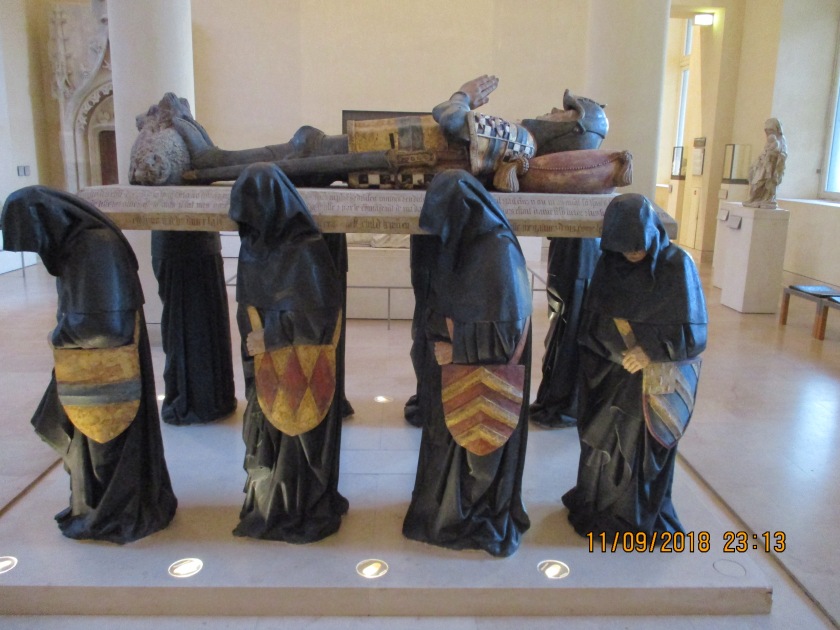 Very near the Louvre, is the Arch d’ Triumph.  As you may know this past Sunday was the 100 year celebration of the end of the first world war. There was a service at Notre Dame and also world leaders assembled to pay homage to those that lost their lives.  The Arch d’ Triumph is situated on a beautiful park.  Look carefully and you will see Carol in the lower right hand corner. It gives you perspective on how grand this structure is. 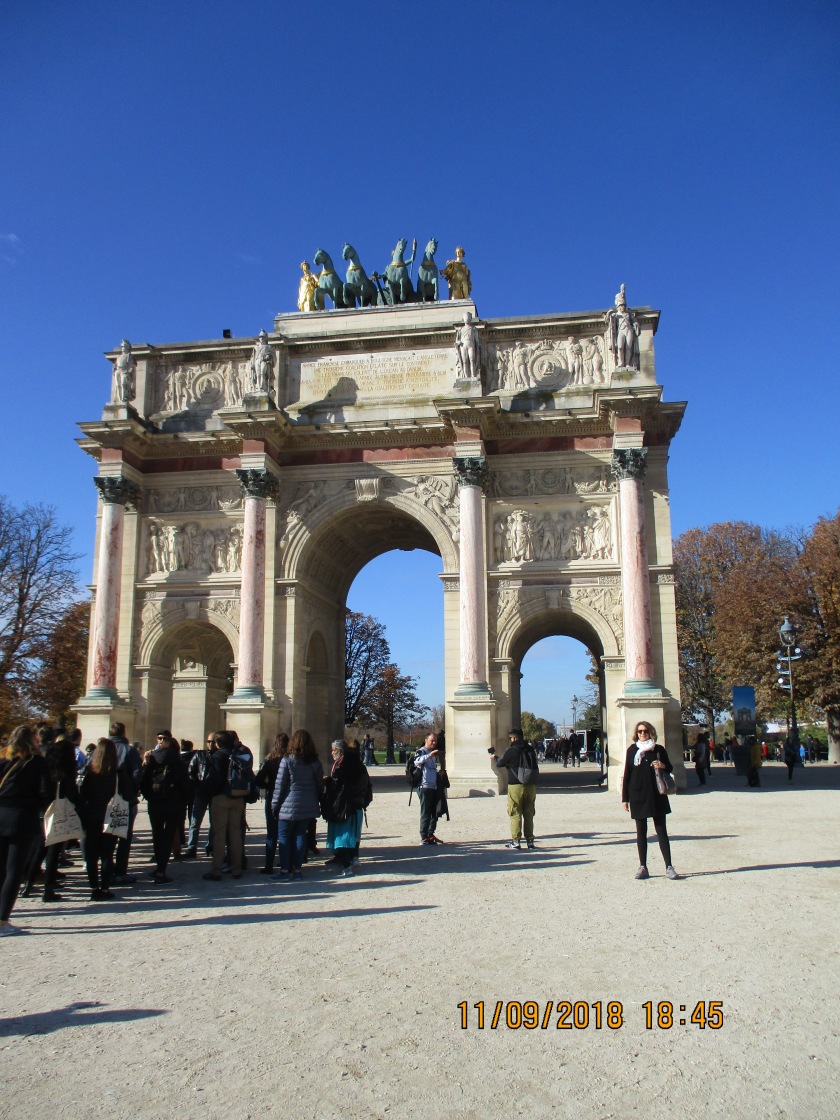 One memorable activity for me will be the cruise down the Seine River.  We passed under ornate bridges, and many of the iconic buildings in Paris.  We stared out from the pier at the foot of the Eiffel Tower. 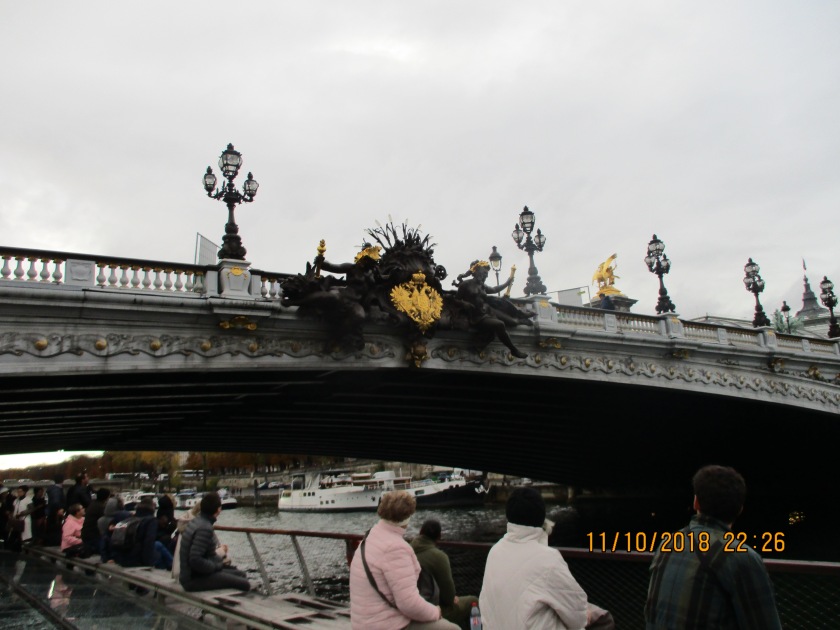 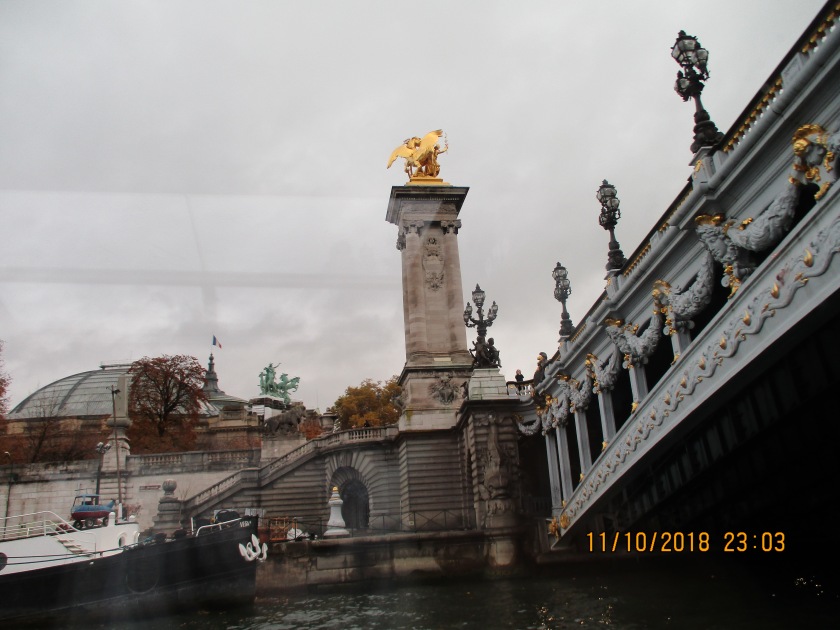 One of the first places I visited upon arriving in Paris was The Sacred Heart Basilica on Montmartre,  It is known as the hill of the martyrs because St. Denis the first bishop of Paris was decapitated for his faith. It is built high on a hill (fabulous view of Paris!) It is unique because they have perpetual prayer night and day and have done this for over 130 years.  The Basilica is a sign of hope. The brochure said, “Up here the Lord is present. Up here someone is praying for me. “

And finally a wonderful picture taken by a passerby who then emailed it to us!

One thought on “Paris Blog!”